A underwater dam inspection with the sonar. 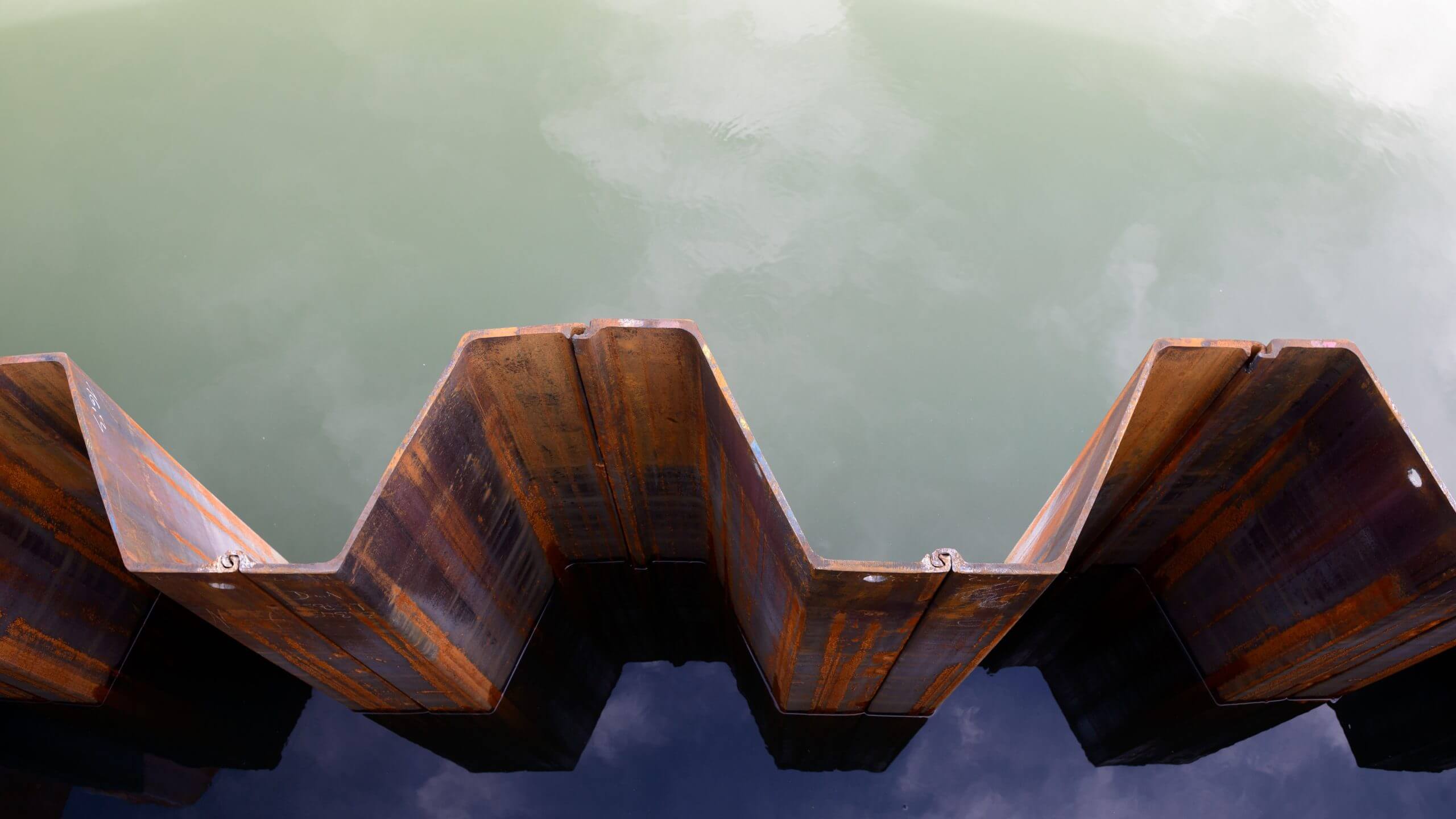 Recently, our services were deployed to inspect a steel dam wall. This was due to a subsidence of the pavement behind the quay. The possible cause of the subsidence was unknown, the dam wall above water showed no defects.

During our inspection it appeared that locally in front of the dam wall large sink holes had been created by the propeller action of mooring vessels. At one of these locations the dam wall appeared to have partially collapsed at a depth of 6 metres below water level. The dam wall had sagged by more than 80 centimetres towards the front. This was the direct cause of the subsidence of the pavement behind the quay.

Poor visibility due to turbid water!

During the inspection, it soon became clear that the sheet piling could not be inspected with just a pair of eyes or a camera. Visibility was limited to approximately 40 centimetres. Turbid water restricted visibility, meaning that defects that could only be observed over longer lengths could not be recognised with the naked eye. Hence our claim:

The right sonar is indispensable for a good inspection!

Sonar images from the ROV

At first glance, the sonar images also showed nothing wrong with the dam wall. This was actually a confirmation of the camera images. We did not discover any cracks, fractures or broken elements.

However, there was something wrong, something we only found at the end of the inspection!

We found a failure in the dam wall at a depth of 5 metres! Above water, the dam wall had been held in place by the anchors, but 5 metres below water level the dam wall had partially collapsed. This could only be seen when zooming out on the sonar, which makes it possible to compare images at a longer distance.

Because of the longer distance, it was easy to see that the dam wall itself was no longer straight. We were able to measure this out nicely with a programme!

What made this mission a success?

The mission was actually a success due to three factors:

-Experience of the drone operator

Without sonar images, we would never have noticed the curvature of the dam wall. This can only be seen from a greater distance. Eyes alone or a camera would therefore not have been able to detect it. This is why we use the sonar of Blueprint Subsea!

To exploit the qualities of a good sonar, it is important that it is mounted on the right underwater drone! In this case, the Revolution ROV contains accessories that allow it to hang straight in the water, in the same place. This is exactly why images can be viewed well, during and after the inspection.

This is also due to the rotating head in the Revolution! This allows you to remain suspended in the water while moving the front of the drone. The head of the drone contains the camera and sonar. This way you can move from one spot to another and get the ideal images from an inspection.

The last point is of course also important: The experience of the drone operator.

For example, our drone operator saw that there was a bend when he zoomed out with the sonar. By using experience and looking for different possible causes of a problem, we get a lot of results. In addition, our operator had also mastered the drone so well that the right images were made. This simply means that the machine itself is not enough, because even with the best equipment, people still need to look closely at the images. The underwater drone is the best tool for this!

It is actually an easy conclusion: without the sonar on the Revolution, this would never have happened!

It is nice that the images have been made, but then? We worked this out for our client in a report in which the exact cause and effect are elaborated. The dam wall had partially collapsed, which led to subsidence behind the dam wall!

In addition to our report, we also gave advice on how to solve the problem and prevent it from happening again in the future. No strings attached, but H2O Drones has over 30 years of experience with underwater work and understanding of the assets. This way we help to make the world a better and safer place with every assignment!

You can see the image report in our YouTube video below!

Do you also want to inspect a dam wall? Or an (online) demo? Please contact us about the possibilities! Follow us on social media to stay informed about our developments! Facebook, LinkedIn and YouTube.