Remote controlled underwater drones or ROVs) provide search and rescue teams with a safe and effective tool for searching and recovering victims and evidence.

Typically, search and recovery teams have limited budgets to carry out incredibly complex and difficult work. The use of an underwater robot allows teams to make the most of the budget they have to carry out operations.

To explain this, here are some true stories where the use of an underwater drone really helped!

There are some true stories here, where we don’t always have the subtleness read… at your own risk.

Functionality of grippers by salvaging objects

An underwater drone is a highly manoeuvrable underwater vehicle equipped with a camera to provide operators with a live view of the underwater environment. Intelligent and easy-to-use ROVs are durable and portable solutions for underwater inspections.

The DTG3 is a mini observation class underwater robot built to allow operators to quickly deploy and visually inspect below the water’s edge. Equipped with an internal, rotating 4k camera, the unit can maintain position in the water while rotating 270° above and below water. Using expert engineering and the help of gravity, the ROV shell and propellers can be rotated while gravity holds the internal semi-circle-weighted frame down. This allows the ROV to ride straight up and down, forward and backward, while using the same propellers for thrust.

The REVOLUTION is a completely redesigned underwater drone. This mission-ready ROV offers a larger payload, can dive deeper and has advanced stabilisation. Rotating the head allows operators to rotate the camera, manipulators and sonar 260° while in moving water. The 6 propellers provide side-to-side movement of the camera and accurate rotation forward and backward, providing maximum control and an advanced stability posture.

Both vehicles operate with BRIDGE-technology from Deep Trekker. The BRIDGE offers enhanced operational capabilities with a technology platform and provides simplified control and constant communication for optimal usage of your drone.

The use of an underwaterdrone allows teams to minimise their used budget by keeping divers safe, and to use an ROV in difficult or challenging situations. In addition, divers can be spared for situations where they are absolutely necessary, allowing the ROV to handle more mundane tasks.

Search and recovery missions can be dangerous and time consuming for divers, making an underwater drone or robot an incredibly useful tool for teams. Working alongside divers, ROVs provide immediate eyes in the water to assist in many facets of recovery and salvage, from the rapid identification of targets to retrieving items from dangerous locations.

Shane Seagroves, Director of Emergency Services in Lee County, NC noted one specific instance where an underwater drone kept divers out of the water. “You take the ROV and you can find your target on the bottom pretty easily,” Seagroves noted. “We identify the target with the boat, so we use the ROV instead of having to hop with the divers. We deploy the ROV from the boat and check the target.”

When using the ROV, this means the divers do not have to spend too much time identifying the targets.

Seagroves stressed that divers still have a place to search and rescue and that the use of ROVs is not about replacing divers, but about keeping divers safer. “A lot of the divers are hesitant to ask us to come out because they thought we were trying to take them out and it’s never been for that. It’s always to make it safer for everyone out there.”

Maine State Police Special Agent Glenn Lang echoes Seagroves’ statement, “You don’t replace them, it makes them safer and it protects the lives of the divers because it can be so dangerous to go under the ice…. 25 years ago I lost one of my friends diving under the ice, it’s just so risky losing divers that way is just unacceptable when you can put an ROV underwater.”

Using an underwater drone in search and recovery missions allows divers to stay safe and out of treacherous situations. In addition, the ROV can provide assistance to divers so they can complete their missions in a timely manner and reduce the time underwater.

“It’s all about safety for us,” Seagroves shared. “Safety for our divers, and speeding up the process.”

The use of ROVs allows teams to minimise the time required for search and recovery. By using the ROV for target search and identification, teams can quickly find victims and evidence.

During the ‘rescue’ of Kelsey Starling, Ashton Davis, Houston County Search and Rescue Chief and Board President, noted that using “the camera rotation feature as opposed to driving and risking entanglement” was incredibly helpful. In addition, the depth of the search area is often more than 70 metres; meaning the divers would have to decompress for almost three hours to search for 45 minutes. The DTG3 was able to dive all day, reducing the risk and maximising the search time for Kelsey.

Davis noted that the use of an ROV was essential throughout the search process. Maximising both the safety and efficiency of the diver allowed the team to conduct the search in the best possible way. “It will definitely be one of the tools in our toolbox,” Davis said.

Seagroves shared a comparison of two searches, one using an underwater drone and one using towing procedures. “There were two drownings, 30 miles apart, within two days. They called me to go to the first one. My first passage with the boat I got a good view pulled the ROV down and checked the target, attached the ROV to his swimwear. The diver entered the water, followed the tether down and the victim was in a body bag and back in the boat, literally no more than 15 minutes after the diver first entered the water surface.

That is a success. You cut yourself off from the family, you drop the risk factor for the divers and you don’t keep people in the water all day. On the second drowning, we weren’t called to go up…they were on the 6 o’clock evening news via a helicopter flying over them and they were towing in the bay…that was a 24-30 hour salvage on a victim lying in a bay. Our salvage was less than an hour, they were there for 30 hours.”

Salvage can also be made faster and safer by using an ROV to assist divers. Ashton Davis of Houston County Rescue also uses their ROV to make salvage quick and safe. In the Kelsey Starling case, the team intentionally wrapped the DTG3 around the nearest tree to use as their dive guide line. Davis noted that, “having a tether really helps.”

Seagroves uses the ROV in a similar way to make recovery faster and safer for the divers. “We attach the ROV to the target and let the diver go down and do the salvaging,” Seagroves explained.

“By far the best piece of equipment other than divers is this ROV,” Davis shared, adding that the work possible with both human divers and an ROV makes for an ideal search and recovery team. The battery life allows for long searches in deep and potentially dangerous waters without tiring divers unnecessarily, while the advanced camera search provides quality visibility in waters with varying visibility.

By speeding up search and recovery operations, teams are able to save money and time.

The portability and durability of the drones allow teams to make the most of their vehicle’s versatility. Lang has managed to get creative with his ROV to retrieve sunken vehicles.

On February 1, on Crawford Pond in Warren, Maine, two quad riders unfortunately drove into open water in a dangerous area. Safely and efficiently rescued by the Knox County Sheriff’s Department and the Maine Warden Service, both riders were unharmed, but the quads were lost underwater.

Covering an area of 2.4 square kilometres with a maximum depth of 19 metres, Crawford Pond is a difficult place to find a sunken quad bike. Police had a flat-bottomed dinghy to retrieve the quad, but actually finding the sunken vehicle would require more than that. 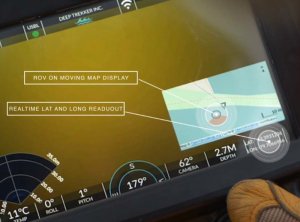 Instead of sending in a diver in dangerous conditions to confirm the vehicle’s location, the team opted to send in the DTG3. Using the underwater robot’s 4k camera, Lang was able to locate the quad within half an hour.

After the location of the quad was confirmed by the underwater drone, the DTG3 was used to tie a tow rope to the sunken vehicle so that it could be pulled out of the water. Without the ROV, the time and resources required to actually locate the quad would have been much greater.

THE DIFFERENCE A DRONE CAN MAKE

The machine was fantastic, I love my machine and I got a great price for it. The support is out of this world,” Lang shared, a sentiment echoed by Seagroves. “Our ROV has paid for itself on initial recovery,” Seagroves said.

“It’s not just our operations, it’s more of a regional asset for the state of North Carolina. It has sped up the process by which we find evidence, it has increased the safety factor because we don’t have to have as many divers in the water as before. When you can use something mechanical or electronic to make it safer for our responders, it’s definitely a great asset to what we’re trying to do,” Seagroves shared.

For more information, please go to the product range to see what we can offer you.

We also have several pages on social media, including Facebook and Linkedin so that you can always keep up to date with developments in our company.